Even if you just extrapolate the intersectional coincidence of two consecutive solar eclipses occurring seven years apart – and at the exact location of a huge Christian cross, the incident itself is quite extraordinary.

Why the press never picked up on this event is astounding, after all, isn’t every day you have two consecutive solar eclipses criss-cross on a huge cross that just happens to be at the right place at the right time – 7 years apart!

Let’s back up so I can unpack this for you.

On August 21, 2017 the United States was in a perfect position to observe a solar eclipse that started in Northwest Oregon and crossed as it were, like a black marker being written on a map, from the Northwest to the Southeast U.S. 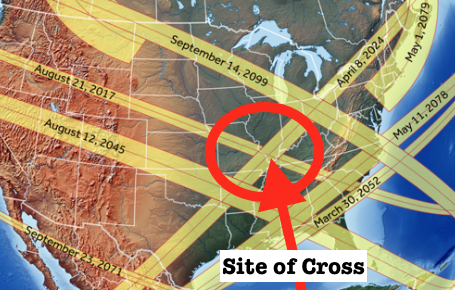 The next solar eclipse, slated for April 8, 2024, will take a perpendicular path that intersects near Carbondale, Ill, in the Shawnee National Forest at the exact site of an 1,100- foot cross known as the Bald Knob Cross of Peace.

Cool, right? A criss-cross eclipse intersects at the exact spot where there happens to be a gigantic “cross of peace.”

Okay, so a solar eclipse isn’t that rare, nor are crosses of large size and structure, so while cool in concept, not as uncommon as one might think. It isn’t as random, statistically speaking, that such an event doesn’t occur whenever any eclipse criss-crosses; it’s just a humorous happenstance.

Until you observe the dates. 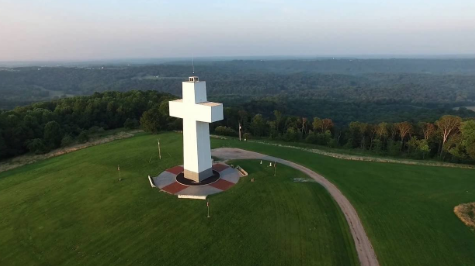 August 21 and April 8 share two distinctions that very few people know about, and the fact that they share this distinction makes it self evident that if there was ever a sign from heaven, this might be it – if you knew what you were looking for….

You see, there is an obscure and unknown book called The Urantia Book that, in addition to many things, also claims to be a new revelation of truth.

One large section of The Urantia Book is a 700-plus narrative of the life and teachings of Jesus of Nazareth. In this section, they state that Jesus was born on August 21, 7BC (later adjusted from the Julian, to the now used Gregorian calendar).  This narrative also states that Jesus was crucified on Friday, April 7th, 30 AD, and he rose on Sunday morning April 9th at 3am. If you account for the fact that Sunday 3am in Jerusalem is still 6pm Saturday night in the U.S.,  or, if we speculate that the process of Jesus’ resurrection probably took place on Saturday (the intervening time between his death and his resurrection) either way, we could agree that Saturday April 8th was the day  Jesus “returned from the bosom of the Father” to rise as the resurrected Christ (dating software we can confirm that April 8th, AD 30 did fall on a Saturday)

So back to our solar eclipse.

How strange is it that two eclipses, seven years apart (seven is a spiritual number), occurring on two significant dates (Jesus’ birthday and Jesus’ resurrection day) intersecting as they did, on the exact site where there is an enormous Christian symbol?

What can we deduce from this event?

Some have suggested that, taking this event into account as I have described, the solar event marks a seven-year “tribulation,” a time of making choices about one’s spiritual commitment; that this event symbolizes a period from the “birth of Jesus to the death and re-birth of Jesus as the Christ suggesting an intervening period of reconciliation and dawning of a new age.

Halpert Katzen, a Urantia Book researcher who attended the first eclipse in 2017, and also drew the same comparisons in noticing the coincidental eclipse, also adds the connection to the Shawnee National Forest is significant because its Native American Prophet is actually mentioned in the Urantia Book (with regard to true spiritual teachers who arise from time to time in human history):

(90:2:9) Ever and anon, true prophets and teachers arose to denounce and expose shamanism. Even the vanishing red man had such a prophet within the past hundred years, the Shawnee Tenskwatawa, who predicted the eclipse of the sun in 1806 and denounced the vices of the white man.

For Katzen, he senses the two eclipses signify a period of choosing, or perhaps a closing of one dispensation, or “age” and the beginning of another.

And he might not be alone in this assessment of “end times” forecasting.

While most mainline Christians have no knowledge of this particular event with relation to the Urantia Book, many evangelical teachings today denote this period as the “end times,” using quotes from Revelations as examples of prophecy:

(Rev 8: 10-12)  10 “The third angel sounded his trumpet, and a great star, blazing like a torch, fell from the sky on a third of the rivers and on the springs of water— 11 the name of the star is Wormwood.[a] A third of the waters turned bitter, and many people died from the waters that had become bitter.

Many believe, because of statements like these littered throughout scripture, that a natural event like an impact of a destructive comet or asteroid is actually prophesied to occur during the “end days,” and this event may actually usher in a new era that lasts ‘a thousand years.’

So we now can draw our attention to an event that is timed to occur just after an extremely unusual second eclipse, and an equally important astronomical event set to occur just before the 2000th anniversary of Jesus’ resurrection, all of this set to occur in the year 2029 when earth will have a strange and spectacular visitor.

Of course scientist are saying today that the asteroid, called Apophis (The Greek God of Destruction) will miss earth by 19,000 miles. But it’s ten years from now, even just a slight deviation in the Earth’s trajectory or speed, or that of the asteroid, by even a few seconds or minutes over the 3,652 days between now and then could spell disaster on a global scale.

In the picture below you see the earth and the thousands of satellites circling the earth’s orbit. To the right you see Apophis’s trajectory on February 13, 2029. While there is a bit of a comfort zone, this is only an estimated trajectory. We still don’t know what effect Earth’s gravity might have on the approaching asteroid.

Some speculate that Apophis could be “pulled” closer to the earth creating a much greater chance of impact.

It would literally be hell on earth if this were to occur, and because of our dependence on tech and our current societal infrastructure, most people would simply not know how to react. We would literally be thrown back into the stone age in a matter of days or weeks, and it would be a long, slow recovery if a major asteroid hit a city or a coastline in proximity to a major city. More than half of the world’s population lives near or within 50 miles of the coast.

The current trajectory prediction, has it passing over the United States after 6pm ET on Friday, February 13, 2029. It will be visible to most North Eastern and North Central residents.

2029 also makes the last year, 1,999 years since the last dispensation began, for that was the day Christ rose from the dead, an event which ushered in a new age, or dispensation.

We know from the Urantia Book that dispensations are periodic and usually occur just before, or just after a divine revelation occurs, and since we have been informed that the Urantia text is a revelation, what we don’t know is whether a dispensation has passed, or is about to occur. Could this eclipse, the subsequent asteroid, coupled with a world war or some societal calamity finally crack civilization into pieces, setting us back a thousand years or more?

Let me add one more item to give my conspiracy some weight.

As I explained in my 2015 book, The Urantia Papers: Exploring a New Revelation, one of the remarkable things about the Urantia Book is that it correctly asserts a multiple of scientific positions that have all later proven correct.

Let me offer one that lends credibility to its claim of authenticity:

In the paper narrating the birth of Jesus and the legend of the Star of Bethlehem, the author states that, in the year of Jesus birth (7BC), there was a conjunction of Saturn and Jupiter that occurred three times that year. The dates of this conjunction are May 29th, September 29th and December 5th in 7 BC.

These dates, though seemingly plucked out of thin air, are accurate and can be proven by astronomy star-map tracking programs.

Dr. Phillip Calabrese, a retired University of San Diego teacher who also holds a degree in mathematics and physics says the statistical chance of correctly guessing three exact dates from over two-thousand years ago, and choosing the correct planets and the correct constellation, tabulates to a greater than ten-million to one chance they would be correct.

There is little chance these dates were approximated or randomly guessed in 1934, when the Urantia Book was written.

Has anyone ever explained the now famous astronomical event (the Star of Bethlehem) with this kind of pinpoint accuracy?

The answer is no. Does anyone clsim to know why a brilliant star led three Iranian priests to seek out a newborn baby in Jerusalem?

This astronomical event isn’t recorded as being significant in any publication except the Bible as an supposed ‘miraculous’ event, but more reasonably explained by verifiable science in the Urantia Book – just as this same book also provides for Jesus’ birth date- which many scholars now believe most likely did occur in the late summer or fall, when census was known to have taken place in Jerusalem (as detailed in the biblical narrative), and just as we are now provided, by the text, the actual resurrection date of Saturday, April 8, 30AD, which can be absolutely confirmed by modern dating programs as falling on Saturday in AD 30.

Look for the signs of the changing seasons.

All if this speculation proves nothing. It only proves that there could be some sign being given to us, depending on our interpretation of said events, and how much these things may be coincidences – but also might be symbolic involving several different circumstances taking place simultaneously now on our world at this time.

There is simmering global turmoil, a solar eclispe that puts us in a seven year reconciliation periodic that has direct links to Christ, and a potential astronomical calamity that, in addition to be prophecied, could also take place at about the time humanity is entering a new millineum.

Or it could be the fanciful imagination of a blogger who is able to loosely piece together a rather interesting conspiracy, pulling strands from space, as it were, that have interesting – if not compelling evidence to suggest something interesting is about to happen?

I welcome your thoughts.